Skip to content
Today we met our friends from Amsterdam at the Villa Bardini, which is located along the Costa San Giorgio. The coste, or ribs, refer to the narrow streets that snake outward from the Arno and up into the hills of Oltrarno to the south of Firenze. 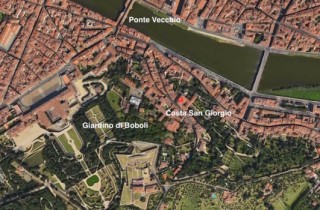 We snaked and snaked, staring in disbelief as the road became narrower and the voice of “the lady” (as Victor calls her) ever more laughable as she pronounced all the place names worse than an undergrad fresh off a plane at Peretola.
Most unbelieveable of all, we arrived in a parking lot atop the hill, shaded and clean, between the Boboli and the Bardini gardens. What was this alternative universe? We tried to ask fewer questions and hastened to park more expeditiously.
After snaking in the car, we disembarked and wiggled down a narrow flagstone street and up a stair into the biglieterria. I do not have my residence card yet because I STILL do not have my permesso di soggiorno (a topic for a different day; refer to the January post about our day in the Questura). This resulted in a conversation between Jason and the biglieterrista, who made a few phone calls before confirming that Jason and the kids were free, but the wife would cost 6 euros. The city parks are free of charge for residents. But you gotta prove it. The legacy of a stickler bueacracy – again, grazie, Napoleon.
We entered into a fantastic gardenscape of greens, flowers, statuary, gravelled paths, and ponds and streams, with views over the river and the medieval skyline of Firenze. We picked out all the landmarks and set to eating our snacks. The kids enjoyed a disused marble horsetrough as a lunch spot. Oh impecunious nobility…
Our friends arrived and we staked out a table for popsicles, snacks, and coffee. Vic and Eleanor know both of their girls from school so the fun began immediately. In fact, so much fun that soon a garden official came over and asked us to stop sliding down the stair rail.
The glicine (wisteria) are blooming in profusion, so many locals and tourists were taking tons of pictures of the purple clouds. We learned that “wisteria” in Dutch is “purple rain” (“paarse regen). (Perhaps Prince only wanted to see his darling in the wisteria? Wisteryah, wisteryah….) I guess wisteria is a thing in the European springtime. Our kudzu-like mess in Oklahoma never looked this pretty.
We were up there a good three hours. It was perfect.

Jason and I agree – if anyone asks us when the best time is to visit Firenze, our response is – the first six weeks of spring. All the color, fresh breezes, no heat, tourist crowds not yet at maximum capacity.