Oh, Florence, Florence. You continue to delight and amaze.

Hallowe’en, a Celtic holiday in origin, so popular in the US thanks to our twin obsessions of dissimulation and sugar. And, for us, a family holiday, as we celebrate the second birthday of our wonderlassie herself, the princess of Samhain, Miss Eleanor Jane Houston, who joined us on a sunny Hallowe’en day in Oklahoma, just after 4 pm, when the veil was, indeed, the thinnest between birth and new life for us. 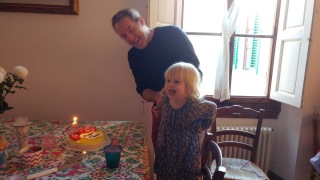 Birthday cake: strawberry/lemon semifreddo. She did ask for “flagola” (strawberry).

I present the October 31 Shoupston family centerpiece, a montage of our values on this multipurpose holiday:

Masha and the Bear dolls, zucca (not yet carved and paganized),
candle (yet undefiled by insertion into pagan idol), fresh flowers (you know, for a birthday,
but also in anticipation of All Saint’s/All Souls on November 1 and 2,
and also, these gorgeous things were called “fiori di ping-pong” and I could not resist.) 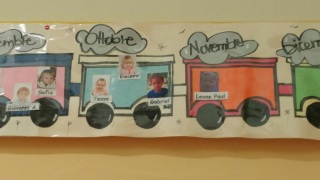 Italy has an uneasy relationship with Hallowe’en. It’s still a country that is very culturally Catholic, and the pagan images, no matter how stylized do not sit well. They rest uneasily alongside crucifixes. 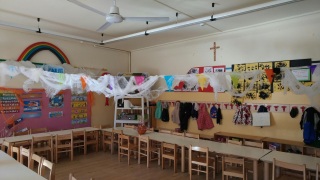 Spiderwebs and the crucifixion.

An American friend with a daughter close to Eleanor’s age related also how Italians reject the idea of a humorous Hallowe’en costume. Even children must be dressed up as witches, goblins, ghosts, and skeletons. 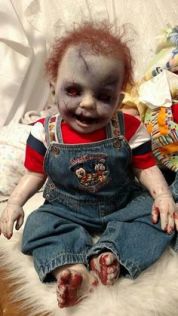 American idea of funny costume.
(I would never)
(SERIOUSLY WHO DOES THIS TO THEIR KID??!!) 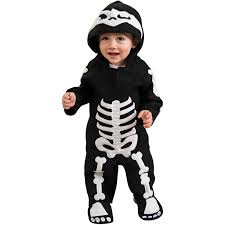 And why would you waste a perfectly good zucca on that carved monstrosity. And put that candle in a sanctuary in front of an icon, for the sweet love of all that is holy.

Trick-or-treating: such a complicated topic here. As a GenX American I can tell you that I had the rare, unsupervised Hallowe’en candy sprint through the neighborhood, but more often was closely supervised by my parents, who carefully checked our candy for suspect treatment, then rolled their eyes as they handed over our rightfully acquired ten pounds of refined, artificially-colored sugar.

I’ve heard tales of Americans trying to trick-or-treat in Italy. What madness, I think. I would not even attempt that in a random neighborhood with my own children in the U.S.

There is one quartiere in Florence, our own former Le Cure, which is said to be open for trick-or-treating. In Italy, the whole trick-or-treat affair (which Victor charmingly pronounces “trickle treat!” which makes me giggle each time I think progressive leftist thoughts, and then think, we really ought to coin that.) Various expats will head up there this evening to go door to door.

Last week, Jason’s campus hosted the children from Victor’s scuola materna for a Hallowe’en party. The littlest ones (2 and 3) were plenty confused, but who wouldn’t b
e by 50 extremely friendly and gently noisy American college students. The kids in Victor’s age group (4 and 5) were more into it. They made cards and ran around downstairs in the student lounge, then trick-or-treated through the offices of the Gonzaga-in-Florence staff. Their instructions were very specific. One candy each door! Do not eat your candy until you go home from school! I donned a witch hat and did my bit for the team. “Dite dolcetto o scherzetto!” (“Tell her trick-or-treat!”) The children shyly held out their very modest (by American standards) paper treat sacks.

Here I am, wearing my requisite witch hat with a bowl of German candy
in front of a depiction of medieval Siena. Sounds about right.

As for us, we will be here in the palazzo with our lovely landlords, the Screti family, who are hosting us for dinner along with their entire extended family ( this is what I love about Italy). They have so many children (5) and grandchildren (12) that they are making their own door to door trick-or-treat party. Victor abhors a costume, and Eleanor is still pretty clueless about it all, so no costumes for our kids this year.

Except this, for Victor. The baffo al palio.

Riding the C1 to school, baffo at the ready.

Yes, he loves this. The instant costume! So funny! But, also, and importantly, not binding. Signorino, no costume? Yes, I have a costume, he says, and whips that stick up to his face. Suddenly he is Phileas Fogg, which is fitting, since his school divides up the children by sections and language of instruction (Italian, English, bilingual) along the lines of the protagonists of the classic Around the World in Eighty Days. His section is monikered Mr. Passepartout (the others are, of course, Mr. Fix and Mr. Fogg). We examined the portraits in front of the elevator and decided he was, in fact, Mr. Fogg.

The most beautiful lintel in all of Florence.
Tunisian consulate.
Grocery list featuring critical additions by Eleanor age 6.
Peeping the magic of other gardens this wisteria season.
The wisteria are especially full this year.
930 PM.