I’m still working on my inner versus outer maps of Florence, now that I have figured out the mystery of the Four Seasons entrance on Borgo Pinti. The memories fade in and out, but when they fade in and stick and I can’t place them, they are like the visual version of the earworm.

I have  a few more that are gnawing at me.

When Jason and I lived here, in 2005, it was full summer. I remember that we were often on a street, looking down another street, to take a right turn to go back to Le Cure, but in those summer weeks, to turn right up to Le Cure on that street meant to trade comforting dark shade next to generous stone buildings for the blinding heat of a stucco-lined wall. And so we always dreaded this particular right turn, either on foot or on motorino, because it meant to step from a medieval stone glade into a miniature Florentine version of the Sahara, like a De Chirico painting.

Where is this turn, this intersection? Was it a small piazza? I can picture its segment as clear as day, but now we are in the wrong season to easily identify the cool/hot chiaroscuro. I know it was between the Duomo and Le Cure.

Was it really a turn onto Cavour from between La Pira and Cavour? Close, but doesn’t seem spacious enough as in my memory. Also Cavour goes in the opposite direction than the one we would have been heading in.

It’s around here somewhere. I’ll find it again, and avoid it in the dog days! 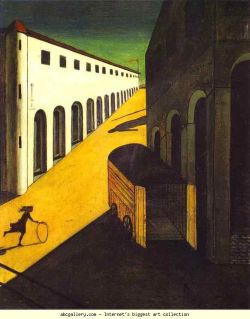 A second homeless, unmapped memory, more recent this time. In the spring of 2013, our friend Mel and I went to the Dali exhibit, taking the train from Arezzo for an urbane day in the bigger city. Somewhere around Stazione S.M.N., we ducked into a caffè and were charmed by a barista who made us beautiful cappucini with foam shamrocks on top, and practiced his English with us. Where was this caffè? The tangle of blocks and small businesses around the station now seems infinite, and dominated by cell phone accessory shops and fast food. I can see it in my mind, and we’ve been to the blocks around the station a few times, even as recently this weekend, but none of the map makes sense to me.

Older caffè than here pictured,
but similar barista, who looked like a Hemingway toreador.
One last memory map confusion, not strictly limited to Florence, but now dishing up at the buffet of European space-time memories. A street that I walk down every day from dropoff at I Scolopi as I head home reminds me so much of Strasbourg that it renews my Gallic melancholy from that year. The liceo, the autumnal plane trees, yellow leaves dropping to the pavement and disintegrating under feet and in puddles.