Carnevale is February 28, late this year. The kids at school are getting ready for it. I learned today that the various characters of Le Bal en Masque are all traditionally from different cities and regions of Italy.

Rest assured Victor will not wear a costume, beyond a moustache on a stick, but Eleanor has been parading around in Peppa Pig at home for the last week and a half. 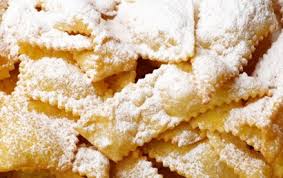 Cenci are out in force in every caffe and supermarket – what’s not to love about salty-sweet fried dough strips, generously dusted in powdered sugar? Sold by the etto (100g), they are everywhere. Often they are thrown into the oil and pulled out just as quickly, resulting in a jumble of crumpled rectangles, but at La Loggia dei Albizi they are lovingly folded into 8-inch canoes, symmetrically lined up in the glass case. I’m a fan of that kind of attention to detail.

At Caffe Paskowski, the rectangle jumble prevails, and they are often confused when I ask for just one with my macchiato. “But they are sold by the etto!”
“I know,” I responded. “I just want one … cencio.“
So routinely are they discussed in bulk that the singular form of the noun sounds amusing spoken aloud.
“Please give me one … cencio.“
The stylish middle-aged Italian at the cassa looked slightly impatient.
“I promise, I did this yesterday, and I paid 80 centesimi for one … cencio.”
“Really? You paid 80 centisimi for one cencio?”
“Si,” I said. “Qua.”
She took my money and gave me a scontrino: one cencio, 80 centesimi. And the macchiato.
At the pastry counter… here we go again. Gracious confusion.
“What can I get you?”
“One cencio please.”
“One what!?”
“Just one cencio,” I say, pointing at the platter of fresh cenci.
I wonder, maybe the singular form is cence? It probably is.
I bet I’m saying something filthy. Wouldn’t surprise me. But they’re so gracious.
The pastry associate pulls a cencio out from the jumble and places it with a waxy napkin on a saucer and gives it to me.
It is huge, fresh, and sugary.
It is delicious.
It really goes great with espresso.
I am going to have to look up the gender of the singular form though. God knows what I’ve been asking them for. Bakery nouns, as we all know, quickly convert to prurient euphemism in almost every language. Go ahead. Think about it.