The last two weeks in Florence have been ones of adjustment and transition. We arrived three weeks ago today, and although have been settling in to our comfortable and well-located apartment, were a bit unprepared for the staggered start school dates for Victor and Eleanor as we juggled work and ad hoc childcare and transitions. 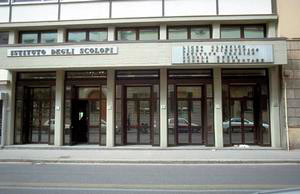 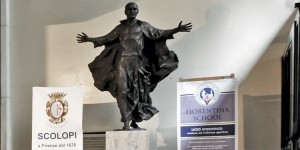 The flying priest greets us each morning as we come in.

His day runs from 9 to 4:30, and his teachers Sabrina and Ilaria are wonderful. So far we are pleased with his experience, and ours – all the more so given the news this past week out of Norman, and the debacle and dispute surrounding a priest’s sudden decision to close St. Joseph’s ECDC, where Eleanor would have been attending this fall. (Victor would have already moved on to Lincoln to become a Lion there.)

Quick rundown of Victor’s impressions of school: those school slippers are not cool and he refuses to wear them, why do those Italian kids wear smocks, and he appreciates how at lunch he is required in the mensa to take seconds. Let me just explain these three points for amusement’s sake:

1 – Italian early childhood schools require that children change out of their street shoes and don their school slippers upon arrival. There is a special slipper station with cubbies that have their names on them for the shoe switch-out. This is smart, and quasi Japanese, and fits with Victor’s native courtesy to remove his shoes immediately upon entering any residence. However, he does not love, to put it mildly, incorporating new attire or footwear into his rotation. He hates these slippers we bought. I actually like them; they kind of look like Felix from “The Odd Couple,” and are in search of a smoking jacket. I alerted his teachers at orientation to his particularities with respect to wardrobe and they promised me they would work with him on the slippers. This is an especially germane requirement in Florence, where, as Eleanor frequently comments on our strolls, “so much … doggie poo!” 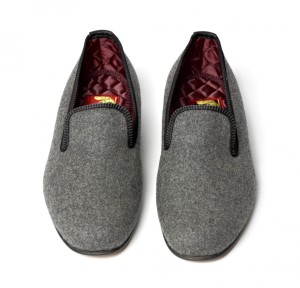 Slippers in question look very much like these English ones, but are euro size 27.

2 – Just this:
“Mommy, what’s that big shirt called?’
“A smock.”
“Smock. Smock.”
“Yep – they wear it over their nice clothes. You know how Italian kids wear nice clothes?”
“Yes.”
“They don’t want to hurt their clothes with paint or food.”
“Huh.”
“Don’t worry, we won’t make you wear a smock. You don’t wear nice clothes really anyway to school. Plus, you’d probably run away from home. But then. you’d be wearing a smock too.”
[quizzical look] 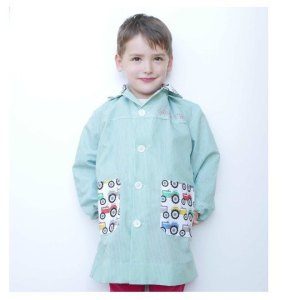 Over his dead body would he be caught in some getup like this. He has a few versions of Seinfeld’s “golden boy,” which would be better used for scrubbing a toilet than wearing to school. If you hear calamitous screaming in the hall, it’s either an Italian classmate saying goodbye to his mama, or Victor being confronted with a smock.

3 – Italian lunches are no joke. I like to think Victor is having recovered memories of his year in Arezzo as a one-year-old, in Santissima Maria Consolatrice, at his tiny dining table with silver service and proper cutlery. 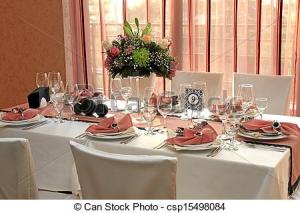 He is getting something similar, I hope, in Scolopi.

Jason and I laughed about how his teachers are likely scandalized by how fine-boned he is.They’ll fatten him up soon enough, or die trying!