I reflect today on the arc of influence that Europe has shot through my life, and how fortunate I have been to have lived, traveled, worked, and studied in the EU in every decade of my adult life – as a teenager (a semester in Spain, mostly), in my twenties (a year in France, and everywhere else), in my thirties (annual trips; Italy and Finland figure prominently; a return to Spain; a year and more in Arezzo), and now in my forties in Florence.

The Florentine forties. That has a nice ring, now that I write it. 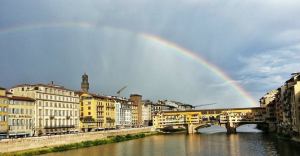 This recurring loop has also informed my view of Europe, and myself, and culture; the lens has been ground, and refined. Understanding comes into sharper focus. As a teen in Spain, I was perplexed by the response of Spaniards to my presence in their remote, damp province of Galicia.

I had no context to understand how completely out of the ordinary my endeavor was in gallego culture. To me, I was enjoying the independence to which I had earned rights by education, and was fortunate enough to have parents who saw value in it. To Spaniards. I was a single adult daughter, dispossessed. And I looked fairly marriageable to them – no wonder they tried to put this American spare tire into the trunk of their Spanish Ford Fiesta. “She looks amenable, and unconnected enough. Let’s fold her into our clan. She’ll love it so much, she’ll never want to leave.” My natural disposition probably contributed to this consistent response. “¡A Mónica le gusta todo!” 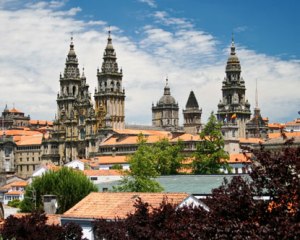 Not Santiago, but Pontevedra,
a city that has figured prominently in my personal history with Spain

France, two and a half years later. Similar themes, compounded by my rudimentary French and, in some ways then, personal incompatibility with French culture. I was viewed as an unmoored single woman, stealing in and out of the country in a span measured by months, with no true connections to speak of. I struggled in France. Alsatian culture tends toward the protective and reserved; centuries of mitteleuropean border wars and land disputes, combined with an uneasy cultural hegemony, have seen to that. Where my warm Spanish friends were willing to befriend an American for a few months out of curosity, the French were having none of it, with the exception of a few friends who were Frinternational. (And gallegos, for what it’s worth, are considered, for all intents, the Spanish analog to French culture, with their reserve and conservativism.) I floated through Strasbourg in a kind of unhinged linguistic confusion and cultural terror. It got better after the winter break, but still – France viewed me as someone whom they would like very much to depart their country as soon as possible. Or, more likely, with a breathtaking indifference. Either perception smarted, and I returned to the U.S. trying to work out what had taken place between me and France. 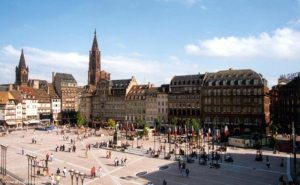 Strasbourg, Place Kléber
if you squint you might see my scurrying figure

I didn’t return to Europe for five years after that – my longest hiatus.

To come back into Italy with Jason was a revelation. I was not hissed at, or harassed. Attempts were not made by locals to immediately marry me into the family of a recently-met stranger who happened to be their cousin, or nephew, or confirmed-bachelor son. Jason wears Italy well, like a comfortable suit that still manages to look smart. He is culturally and linguistically proficient in every way with Italian culture, and this has been the case since we met.

Italians light up when they meet him. He is such an anomaly, they cannot believe it. An American who talks like this! Who talks like we do! Who looks like this! Who knows secret directions and shortcuts to small towns, who remembers feast days and festivals, who does not lose his cool at the sportello unico or when stopped by the carabiniere for a random document check in Sicily or the questura, and who has been known to shout back just a tiny bit at Italians in public situations when the situation warrants. It began to dawn on my how much my experiences in Spain and in France years prior were not so much based in cultural learning and understanding, but wore the heavier cloak of age and gender.

With Jason, I was schematically understood as a girlfriend, a fidanzata, a wife, and later, a mother. This brought with it an immeasurable cultural cache that became a door into understanding culture better. Now that they could see me as a person who fit into their understanding, they were open to me. Suddenly, Europe seemed to roll out the red carpet of acceptance. I do not think it would have happened like this were I to have remained single and traveling independently up to the present. Europe wanted a familial context to vouch for my good standing as a human, not because I was judged as a less worthy person without the family context, but rather because they simply could not place me.

This became most apparent in Arezzo four years ago. With Victor in tow, running about town always late for something or another, fueled on espresso, baristas and shop owners would lean out to greet me with a friendly shout, or come ask me if I would please bring in Victor so that they could give him a snack. Any Italian was pretty much up for answering any random question I might pose to them, and with a smile. I felt safe, and supported, and protected, welcomed into a community with my impeccable family credentials. 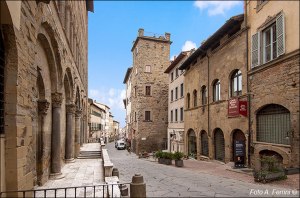 Arezzo, Corso Italia,
scene of many a late morning madcap rush in stroller to Victor’s daycare

Incredibly, this extended to France, as Jason and I took Victor t
o Paris for almost a week, with our friend Mel in tow to pinch-hit for babysitting, and meeting Jason’s brother and family, who were also living in Europe for the short-term at that time for a research grant.

Suddenly, Paris was open and welcoming. I felt more accepted, and French spilled out of me. French parents spoke to us at parks where we took Victor. The more comfortable and less nervous I felt, the more easily I interacted with Parisians for various purposes, and the more they complimented me on my ease, my language, my accent, even through a minor medical emergency, talking to doctors, pharmacists, and SOS Médécins on my Italian cell phone and in person until said minor medical emergency was satisfactorily resolved. How can this possibly be the France I remember? I thought to myself. But it was the same France – I was not the Monica that France remembered. 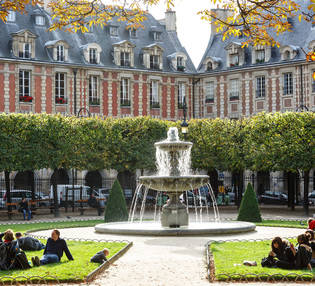 And so I am lucky that my story arc has come this far, and is imbued with a richness of context and comparison that I can fit into this framework of understanding.

There is plenty more to come on this topic – I just wanted to lay some groundwork.