As you know, I have rented office space in the Sprachcaffe, on Via Brunelleschi, on the south side of Piazza della Repubblica, closest to the Arno.

The warm and friendly international staff have been a boon to me this fall as I move through the innumerable steps of cultural and personal transition. They have all been, to a person, respectful, international, and welcoming.(Okay, maybe slightly less so that one guy, Francesco, who seems to maintain a huge wardrobe of logoed college hoodies, and who shushed me that one day for being on a conference call in my rented salotto. But he and I worked it out that one night at aperitivo hour with everyone from the school.) There’s a Canadian-Italian, a German, some other Americans on
staff. A Romanian or two. A possible Russian, and some more Italians. It is a flourishing business. 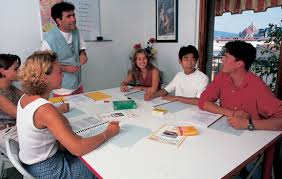 I think this man actually is on teaching staff.
But this picture is at least ten years old.
He’s really nice.

The student population is composed of a varied mix of Erasmus students, fine art people, wandering small groups of the same geoethnic origin, and Women of a Certain Age, the last group perhaps hoping to star in a real-life Barilla commercial.

The foreign student crowd is mostly present in the early afternoon, after their Italian language classes have concluded. By 5:30 p.m., the Italian professionals begin arriving to join their evening foreign language classes (French, Spanish, English, German). A number of these Italian professionals are weary, suited men over 55. There is also a group of schoolkids who do an English class, and who have some tiger moms of both Asian and Italian origin.

The director of the school, Iris, is Florentine through and through. She is a nonna, with one grandson, who just turned last week some number under 60 which she would not specify. Iris is very proud of her city’s storied history, and from time to time she comes to sit on my conference room table to loop me on on important topics, which in the past have included:

This is all critical information in Florence. The past doesn’t feel that far away. Seriously, Iris talks to me about the Medici family as though they were all still alive.

She gets going, and goes fast. I try to follow but am probably getting about 70%. She is also very Italian in that no sidebar conversation is too long, so I have to limit her somewhat guiltily in an American way as I watch my email and IM go nuts for my work between 2 and 6 pm.

Yesterday, she stopped by my table. I wished her a happy late birthday, which made her very happy indeed, as she kissed both my cheeks and said auguri were always welcome. “Monica, cara, what do you think of the Tramp results?”

I always pause when she says “Tramp” before I realize she is talking about our president-elect.

“I was molto turbata last week, ” I say. “This is terrible news.” I smiled weakly. “I am regaining my composure now.”

Iris perched on the edge of the table to settle in for a nice long contextual explanation. “Do you know, Monica? Your system is still better. Do you know why? At least you all voted for your turd (stronzo). We don’t even get to vote for a turd. We haven’t voted in four years. All we have are groups of turds who run things behind the scenes and who keep picking new turd leaders from within the party. It’s an embarrassment.” I nodded. Iris never loses steam. “And this constitutional referendum! It is ridiculous.”

“I don’t know anyone who is voting yes for it,” I said. As though I had just personally polled half of Tuscany.

“Ma che!” Iris exclaimed. “The Italian constitution, written in 1946, is the MOST beautiful thing about our country.” She declaimed the first sentence of it for me, which I know because Jason also – and often – declaims it. This must be some kind of calling card for Italian culture. I make a mental note to memorize the first sentence of the Italian constitution. “… And these unelected turds,” she continued, “just want to change it like idiots.”

“Renzi is going to have to step down,” I said, repeating what I read in the paper over a capucho. “This is never going to pass.” PM Renzi, like the erstwhile UK PM Cameron, has banked his political career on the passage of the constitutional  referendum.

I stayed quiet about the unreliability of polls and the filter bubble, and held my tongue when tempted to caution her against believing that all of Italy would vote as the Florentine electorate – comfortable, educated – believes. This has been a theme in 2016, people – pay attention. The electorates do not want to take the medicine. They are tired of being told what is good for them when they feel like nothing is good for them.

“Well, the good thing about you Americans,” she went on, “is that you will get to elect your own turd, and if you do not like him, then you get to go back to the polls in four years and elect another turd.”

I fail to completely see how this is progress, but next to what she has explained, with very clear frustration, about the Italian system which is dominated by party rule, I can kind of understand it.

“And, if your newly-elected turd is a huge turd, you can impeach him (buttarlo)!” she added. “Then you know that you elected him and you kicked him out, and everything was free and open.”

“I do not like how our presidential elections have disintegrated into cults of personality with no discussion of policy,” I say. (My Italian is a little stammering at this point. I am freely inventing words and grammar to convey my political opinions.)

“Well, we have that too, but we never even get to vote on the turds,” she said. She clapped an open hand down on the table, and said, “I have to go.”

At this point all I can think of is Mr. Hankey the Christmas Poo from South Park. 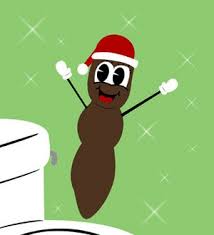 I was very glad that Iris was able to shed some positive light on this whole outcome for me, in terms of “turds you vote for versus turds you don’t vote for.”

She’s got a point. I didn’t vote for the Tramp turd, but a bunch of people did. Like almost half. Even th
ough we know Clinton leads the popular vote by one million, which is a topic for a different post. Or not.

Tramp is, indeed, the turd we voted for.