Europe is in a cold snap. It’s severe to the east, but you know a snap is a real snap when it’s 20F in Tuscany.

The wind blows down the narrow canyons of the city center. My teeth rattle so hard when I am riding my bike that I can’t tell if it’s more from the uneven flagstones or the cold.

A woolen and cashmere peacoat provides insufficient protection, so mine has been retired until it warms up a bit again. I am straight-up piumino, or down coat (Ital., piume, feather, piumino, little feather, or down). My favorite. The one I bought in Arezzo four years ago, is brown and features a zipper and snaps and a positively Sapmi fur-trimmed hood with a drawstring. Harness the reindeer, I’ll be right down! No one recognizes me on the street in the piumino, and the two times someone did, I was surprised, because I look more hedgehog than human in it. Now I’m really mixing similes – I don’t even think Finland has any hedgehogs. 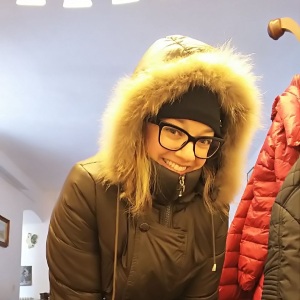 Everyone has a piumino, and everyone wears the piumino. It is a grand Italian solution. NO wind at all can be felt through its padded, stitched layers.

We should have taken the clue from the hot water bottle someone left behind in our apartment that the winter months here might feel historic. Our heat works, but the building is old, and insulation is not its strong point. Many of the very warm heat registers are conveniently located under large windows. Those casements are both historically evocative and drafty.

I’d also brought my Scando hot water bottle back from the US (again, an Italian purchase from a design store in San Lorenzo four years ago, now shuttered), so I deployed those this week. The kids are fascinated.

Victor: What’s that?
Mom: A hot water bottle.
V: Why?
Me: To keep you warm.
V: How??
M: I put hot water in it. It stays warm most of the night. We tuck it into your bed. (I should mention here that his BMI must hover around 5 at present due to back-to-back November illness: five days of fever, then a tummy rampage.) They did this during horsey times.
V: They didn’t have heat in horsey times?
M: Well, they did, but it was not awesome.
V: Did they have pillows and blankets?
M: Yes.
Jason: Their pillows were made of rocks.
M: Do you want the hot water bottle?
V: I don’t know.

Taking an executive decision following his unhelpful user input, I made the hot water bottle and put it in his little bed, dressing it in a 3T t-shirt. We also have a few fake sheepskins purchased at IKEA, which are, undoubtedly, better than having a skinned sheep in the house. I mean – knit a blanket. Don’t peel the sheep and dry it out; it’s not 600 CE. The fake sheepskins each go under a small chi
ld at night. They are a total nighttime hit.

Victor loves the hot water bottle. Between fake sheepskin and hot water bottle, he is getting cozy sleep in his single bed. He woke up yesterday morning, and holding the hot water bottle up. said, “This is a problem. It is cold.” I told him the bottle cannot stay warm indefinitely. “Why?” Because it is the nature of hot water to lose heat. He is not impressed with physics.

Eleanor shares the Scando hot water bottle with me, as it is clothed in its own cover of brown fleece, with a baby reindeer on it. I have thought before that it might be a baby giraffe, but now I am almost positive it is a reindeer. Maybe a baby reindeer. What do you think? Zoom in.

Eleanor on Tuesday night saw me filling the hot water bottles from our old kettle on the gas hob, and said, “Mommy! Coffee pillow!” She continues to call it that, which I love. Don’t stop.

Maybe there’s a market for that. A hot water bottle filled with coffee for mamas with creative streaks and packed days…

A final note. I just had to include these. Life imitates art.