What do we do when we have a sitter for three hours on a Saturday early evening, and it is a perfect day in Firenze? (Overview: leaves: light green and abundant. Sunshine: glowing, but not hot. Breeze: gentle.)

We don’t want to ride our bikes or walk into centro, because the cat is out of the bag about Firenze’s beauty, and the three piazze that form the belt of the centro – Duomo, Repubblica, and Signoria – are thronged with tourists on all their connecting streets.

We ask our weekend sitter Emily, an Ameritalian high school student who lives in Oltrarno, where she would go.
“Mmm, my parents like to walk in Bellosguardo,” she replied.
We are usually looking for a place where we can grab an aperitivo and a light dinner. “Where is it exactly?” Jason asked.
“Oh, it’s above Tasso,” she replied, referring to Piazza Tasso.
“I think I can get us there,” I said. We headed downstairs to our car parked on our piazza, its laminated ZTL B placard skittering back and forth on the front dash. Our other idea was to go to Poggio Imperiale, where our friend Kim was part of a local fiera/mercato selling some of her crafts. After that, we had no further ideas, beyond a glass of wine.

Heading over to the other side of the river, we meandered through Piazza Ferrucci (helpful, since I always wonder where it is, as it is a capolinea for the tiny D city bus) and around toward Tasso, then up, up, up a hilly narrow lane. And up. We saw a couple of signs for Bellosguardo, but then nothing but crumbling walls and vigneti, the tufts of green grass already thriving between lines of vines slowly coming to life. We lost our 4G signal, no map. We kept turning right, going up, turning right, going up, along what I took to be one of the famous “ribs” (coste) that run up through the hills surrounding the city, perpendicular and outward from the sternum of the Arno.

We finally stopped, having no idea where we were. I got out to sniff around in the chiesa di Santa Maria in Marignolle, and admire the villas at the end of long lanes carpeted in last winter’s cedar fronds. It was calm. Florence was nowhere to be seen. The wind gently shushed through the tops of the trees, and the avian choir was nonstop and cheerful. The plaque on the church indicated that the Medici and Capponi, among others, maintained their country homes in the area, and I could believe it.

We decided to try to find Poggio Imperiale, where Kim was with the fiera. My phone was back on grid, so I pulled up instructions, and we began to wind our way down the steep hillside again, hemmed in on both sides by stone walls bordering vigneti and oliveti. Halfway down, Jason said, “You know, can we just go to the certosa? I’d really like to go.” I had no objections, and so we changed course to follow the way to the Certosa di Firenze, in Galluzzo. We’d seen it many times from the road, but had never been inside it. The monastery was in the news even in the US a few years back for closing and relocating the few monks left.

We parked, and were greeted amicably by a man missing most of his teeth doing a crossword puzzle laid across his knees.
“You here for the guided tour? They left at five, you might be able to catch them,” he called.
We walked up the path to the entrance. The certosa was deserted. It was hewn out of solid rock, as is the Franciscan shrine in La Verna. The high walls glowed golden in the evening sun. Gates were locked. The group was somewhere touring. We hadn’t really planned to be part of a guided tour, so not much lost, but it would have been nice.
Just past the distillery was an open shop with another very old man in it. I couldn’t tell with the sunlight streaming in from the window behind him, but he seemed to be wearing clerical vestments. “You missed the tour!” he called out from behind the counter. The shelves were lined with bottles of chartreuse, wild honey, and various liquids described only as “elixirs,” with saint’s names prefixed.

We took a few pictures, admiring the quick peek of the soaring steeple through a courtyard arch, and went back down to the car.
“What year was this established?” I asked Jason.
“1341,” he replied instantly, and rattled off some amusing historical facts about the letters of Boccaccio and Boccaccio’s poor appraisal of the establishment to his Acciaiuoli patrons. “The building was in the middle of nowhere, no one would ever come there, it was crumbling,” Jason laughed. “He was really mad.”
I wasn’t too sad to have missed the tour after all.
“Did you miss the tour?” crossword man yelled.
“Siiii,” we said.
“Well, next time!” he called.

We ambled out of Galluzzo and tried in vain to locate Poggio Imperiale, winding up again at Porta Romana, where the traffic always spins too fast to read the signs.

We parked the car at Jason’s office and walked into centro. Where for the glass of wine? We skirted the outside chancel at the eastern end of the duomo, breathing easy in the cool shadow. Dove? We found ourselves on Proconsolo, and both thought of the fish restaurant with the frescoes we’ve been meaning to eat at. Said fresco in question features the fourth crown of Italian literature, Zenobi, who was deleted from history by the other three crowns, who are recognized today as “le tre corone.” It wasn’t really a frescobombing as Zenobi was prominently featured in the cen
tral foreground.

We stopped outside Fishing Lab to review their offerings and went in. 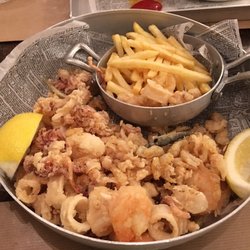 Soon we were each holding a crisp white in a stem. Jason ordered the croquettes, and I ordered a pan of what was described as “street food.” I will tell you now, the literal hot mess of fried tiny seafood in waxy newsprint was something I have not seen since Pontevedra, Spain, in 2005. Tiny squid, calamari, bitty shrimp, and assorted other pescaditos, tossed in impanatura, then fried in very hot clean oil. British style chips on the side. Housemade rich lemony mayonnaise, fat with egg yolks.

We walked home. The kids were tired from their nonstop play in the last 24 – two different playdates, mass hours in park on swings and scooters. Eleanor fell asleep before 8, which is why I am able to give you this account now.

If anyone comes to visit, I will take you for the fried seafood pentola with the mayonnaise and the white wine. Certosa tour will probably feature Jason. No promises on Poggio Imperiale.