[PSA: Tante grazie to everyone who reads me here. My creative faculties have been on fire since we moved to Italy!

If you Instagram, follow me at @occhiatafiorentina, where I am a frequent poster and microblogger of images taken with my phone, both around town and on travels.

I picked up a modest sidebar in October writing creative Italian lifestyle content in English, culturally accessible to an American audience; the firm is based in Verona, Santamargherita. You can find my pieces by clicking on the Blog link and searching for my byline.

I am off Facebook these days as it tends to mute my muse – and she does not appreciate that!]

Il giorno di Santa Lucia (December 13) and the winter solstice (December 21) have passed, Natale has come and gone. The twelve days of Christmas are still assiduously observed in Italy with time off and a general slowing of activity and some serious dining scenes, cruising gently into Epifania and la Befana on day twelve (January 6).

Jason and I got engaged on Epiphany in 2005, on a chilly sunset shore in Charleston – Folly Beach. We went to a Spanish tapas bar to celebrate over tempranillo and membrillo while I sat with perfect posture as the long roadtrip we were on had thrown out my back. Epiphany has always been one of my favorite feast days, and it’s a personal anniversary too.

So the arrival to mid-January in Italy is a shifting of gears, up for work, down for rest. Florentine skies skew grey, and we’ve had days on end of clouds, rain, and cold. Cruelly, the bright skies tend to also be extremely crisp, giving you a double-punch to the gut of both piercing blue sky and paralyzing Arctic air.

The kids went back to school last week, on January 8, with some grumbling after enjoying the generous Italian holiday. Victor asked me, when is the next vacation?

I studied our 2018 calendar, hung on a nail on the outside of our laundry room door. No ink on a date outside of a weekend in January after Befana.

Febbraio, niente. (Seriously, Martedì Grasso on February 13 is not a holiday in Italy? This is shocking to me. It is the beginning of la Quaresma, or the forty days of Lent.)

Marzo, neanche niente! Nothing either!

Aprile! Madonna! ma tu scherz’! (You’ve got to be joking!)
No days off until April 2, the day after Easter this year, called Pasquetta (Little Easter) in Italy.

I think I was swearing under my breath to myself as I realized this breathtaking drought of time off, combined with the sludgy winter weather, and – thanks for this, Italy – Lent – it’s just like they want to load up on the grind until the weather turns and spring rolls out the green carpet.

Speaking of normal time, and the passage of time, and the calendar, an amusing note here. Raise your hand if you ever think, in practical terms, of the Gregorian versus the Julian calendar. Hands up.

Okay, put your hand down if you’re Orthodox Christian.
(Interesting in any case how the gap between the Julian and Gregorian calendars represents the length of the 12 days of Christmas exactly, and Orthodox Christmas falls on Catholic Epiphany.)

I was vaguely aware of the Julian calendar, which began its initial phaseout in 1582, with Italy, France, Spain, Portugal, and Poland giving up ten days. There were mathematical reasons for the switch, like sloppy leap year calculations featuring double leap years, February 30, and further calendrical nonsense.

Time has a different rhythm in Italy. Memories are longer – far, far longer – than those we refer to as the descendants of immigrants to the Americas. 1582? Practically yesterday. We see this in the persistence and prevalence of aphorisms in Italian such as, 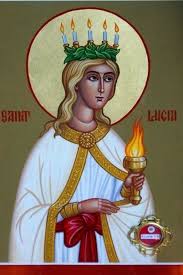 Certainly prior to 1582, the feast day of Saint Lucia was the shortest day of the year in Italy, what John Donne was describing from his dark English table as the midnight of the year.

A Canadian friend in town told me, with some consternation but also a sideways smile, that her son learned this saying in class here in Firenze, with no further historical background, just some cursory contextual mumblings from the maestra.

December 13 is not the winter solstice; solstice is December 21, or thereabouts. But in Italy, sayings outlive political policies that were set in place almost half a millenium ago. The folk wisdom lives on in peoples’ minds, and La Stampa prints current articles to explain to their readership why, in fact, December 13 is not the winter solstice. (But that couplet, that couplet is so nice, who could ever want to stop saying it?)

I’ll take it a step further here, on both cultural and personal levels, and pose to you the question, what neural pathway has become so well trod in your culture or in your mind that you continue to refer to it and say it, internally or aloud? Vaguely aware that it is no longer true, but the words you’ve built around it tend to play in your mind. «Santa Lucia è il giorno più corto che ci sia» is a tidy rhyme and catchy, but no longer describes reality, although it once did.

I might actually prefer Mayan solstice rituals, after all that administrative confusion here in Europe emanating from the Vatican. Kukulkán still slithers up and down the pyramids on time at Chichén Itzá and elsewhere, and that calendar didn’t need an edit and reboot.