You know, it’s the little things. They stick. And because they are so small, and inconsequential, until they are not, they are a rich mine for reflection.

I have written here on mundane cross-cultural topics – scarves, laundry. A dentist visit. Things that locals wouldn’t think twice about, because these things are transparent to them in an of course way.

I read Beppe Severgnini’s Ciao, America! circa 2001, in Seattle. A passage in his memoir covered curtains in America, amusing and insightful for its philosophical bent. The symbolic value of curtains in America. How I laughed when I read it: the familiar through the eyes of an outsider, the mundane made new. I’d experienced with blackout shutters in Spain as a student many years prior, those magnificent, interior eclipse-inducing persianas that could make 4 pm in June seem like midnight in January, affording a long lie-in from a previous night out, or a gentle landing into a new time zone. The name itself of these external shutters, so well-known in the Mediterranean basin, invokes Persia/Iran, purdah, Pakistan, sunbaked bricks, protection from an unrelenting sun. I appreciated Beppe’s treatise on the symbolic value of curtains in America: ineffective, thin, light permitting, offering no privacy, seem like decoration only, and what this indicated to him about our culture.

On a related symbolic note, I give you: our Italian vacuum cleaner.

We live in a generously-sized apartment whose every floor surface is terracotta tile that has benefited from decades of waxing. The tiles gleam like no flowerpot I’ve ever seen. They are glorious in the high heat of a Florentine summer: a natural wine cellar feel permeates the space, even on our fourth floor. But tiles are chilly in winter. Perhaps better suited to protecting fine vintages, or curing terrine in small pots sealed with pork fat.

To address this issue, we purchased a few large area rugs shortly after arriving, both to insulate our living spaces and to provide a softer, warmer surface for our kids to play on, their endless hours of haggling and tussling and watching YouTube videos. And eating. Don’t tell the Italians, but we struggle to get our kids to eat at a table at home. They are usually eating on the faux oriental rug in our dining room, generously spreading crumbs and spilling all drinks. Magnetic play sand gathers in pink blobs, marring the pattern. Play-dough (TM) dries on the fringe. Bits of toys and dried pasta abound.

In an ideal world, we would live in the country and take the rugs out to be beaten once a week, and aired in the fresh sunshine on a dry, breezy day. I am pretty sure this is what happens in the Italian countryside. I like to think this is what happens. 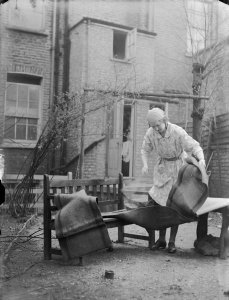 In our old life in America, I would have run our industrial strength vacuum over the surface once or twice a week to achieve a calming sense of cleanliness and order. I credit my deeply Finno-Anglo-Teutonic heritage for this. Plus, perhaps, a bit of the cell memory of my Finnish forebears, who must have observed the basic rule of thumb: have little, scrub much.

In our world, however, we initially tried to sweep the rugs with a broom, then with the smaller hand broom that I know from days keeping a hard floor clean in France, the nimble balayette.

We then attempted to use an old vacuum from in the cantina (storage) in the basement of the palazzo. But it had all the power of a DirtDevil from 1983. None, no power at all. It charged and had a cord-free feature, which was fine, but it was no fun to hear its wheezing whine and see that nothing was picked up from the rug with its feeble suction. Our rugs got dirtier and dirtier. It was a losing battle.

Jason researched and located a new vacuum on Amazon Italy. The most powerful one we could find, we believed. We have Amazon Prime here, which we hardly ever use, so the new vacuum was delivered in a blink. He brought it home and we assembled it. This was when Victor was heavy in his Lego phase, so he helped us put it together. This new vacuum cleaner resembles Noo Noo from Teletubbies more than it does any useful rug sweeper. It has a potbelly, an accordion hose, and an aluminium arm attached to a rotating mouth lined with bristles.

We plugged in the vacuum and turned it on. The aluminium arm barely clears my knees. You all know I am a tad over five feet tall. I had to awkwardly hunch over to push it across the rug. The bristly mouth seemed to pick up a lot of loose hair, which we shed freely on the rugs, but did little to gobble up all the particles from food and play that had gathered in the tuft. The rotating feature of the bristle mouth ensured that it kept flipping over and up, and I struggled to keep the sucking intake facing downward on the rug. After about twenty seconds of this, my lower back began to ache like I had been pulling weeds all morning.

This is the best vacuum we could find?

Our babysitters used the vacuum and came back with glowing reviews, which I received with suspicion. Were we using, in fact, the same vacuum cleaner?

I told Jason I did not think the new vacuum was a huge improvement over the emphysemic DirtDevil from the cantina. He shrugged; he accepts variant Italian outcomes with an admirable aplomb.
“Their rugs here are delicate,” he posited. “They cannot be ruined with overabundant suction.”
I looked at him. I thought of my lower back pain.
“The rugs are old?” he continued, fishing. “They cannot be replaced. They must vacuum them very gently, very carefully; the fibers are delicate.”

I read the reviews on Amazon.it and saw that the Italians thought that this was, in fact, a pretty superlative vacuum.
I was nonpl
ussed.
I put the new vacuum back in our closet and left it there.

I had to hand it to him: of course I understood that wall-to-wall synthetic carpeting, such as we both grew up with in our split-level ranch homes in the US of the seventies and eighties… well, that’s just silly. A truly American goal, to carpet and upholster and heat and insulate your home to the point that you could walk around in your underwear in the winter, and feel like you were in Cabo. Americans want to edit their external environment for comfort. Italians edit their attire.

Our babysitter did use the vacuum on a fairly regular basis, and seemed to obtain better results than I did. However, its bagless design remained a seeming mystery to her. One day she mentioned that the vacuum no longer seemed to be working. After she left, I took it out of the closet, and eyeballed the clear plastic dirt receptacle, and saw that it was jam-packed with grey dirt, dust, and hair. I pried it apart and emptied it into the kitchen trash, creating a huge cloud of floating dust in the process.

A different friend used the vacuum once in our house and made an amusing onomatopoeic imitation of what it sounded like when dried bits rattled up the tube and into the vacuum’s potbelly.

I thought of the horsepower of our old vacuum cleaner in the US, its motorized wheels propelling it across our rugs. Our house in the US was all wood and tile floor, with a few large area rugs, strategically placed. I knew that vacuum sucked up everything. It practically tore the yarn from the mesh. I bought a rug from Overstock.com when we first moved in that seemed to contain the better part of a sand dune from the Katpana desert, and its dirt receptacle filled with the sand that resembled extra-fine granulated sugar, shaken from a sack into a vacuum.

Now, that was a vacuum you could rely on. Even if it were to destroy the tapestries of the Medici.