(I am not even going to go into American policies on sick leave for oneself or family members here.)

Well, that does not really happen. We all get our leave calendars at work and accept them as though they are somehow reasonable – seven holidays a year plus two weeks of paid leave (for anyone who does not work for a bank or on Wall Street), compared to Italy’s fourteen days a year (plus various ponti, or bridge days, taken off in the middle to make a longer holiday) plus four to six weeks of paid leave, or Japan’s 21 holidays a year plus six weeks of paid leave (two weeks at a time, three times a year!). I learned all this in a language class last year at the Sprachcaffe with classmates from various countries. It was a day I took my espresso corretto in the break time that morning with a solid plug of strong anise sambuca just to absorb the reality of what had come to seem normal to me as a worker in America.

On the campus where I worked before moving to Italy, we received 19 hours a month “to use as we wished.” That mean to use for sick days and for time off. If you got sick, then you had no vacation. And if you have kids? Fugeddaboutit. Babies and little kids are always sick. Being a working parent means you get no paid leave nor do you get sick leave for yourself. Every time I try to explain this to Italians they look like they’ve seen a ghost. “But that is inhumane!” they protest on our behalf. Yes, it is – and the culture pressures workers to be thankful that they have a job at all. I don’t miss it.

It is very depressing to list American holidays side by side with the holidays of all other developed economies in the world. We have one day off a year for one religious holiday: Christmas. All other holidays are secular: New Year’s Day, Memorial Day, Independence Day, Labor Day. And then comes the crown jewel of our holiday calendar: Thanksgiving. The apex of American time off, in which all Americans receive two days off in a row. Two! Of course its origins are spurious and apocryphal (one English friend in casual conversation has recently referred to “deranged Pilgrims”). 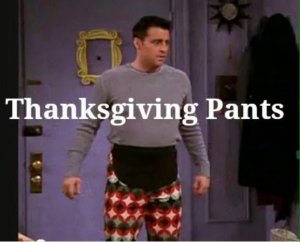 A time to give thanks, to travel to someone else’s house for a long meal or to host at yours, and the relaxed chatter that is normal in most cultures. So rare has this time become in the US that we consecrate one meal a year to it, and then, as only Americans can, we really overdo it. We eat a lot. We prepare an elaborate menu that is through the roof. We invite people over. We often go round the table to say what we’re thankful for in a routine that is itself the source of much dread and comedy. We all eat; like a wedding or a parade, it goes by so quickly. Then we all pass out thanks to tryptophan, whose name we all now know from that “Seinfeld” episode. I am pretty sure “Friends” covered it too. American menfolk eventually rouse themselves and crawl to the nearest sofa to watch some American football.

I get asked a lot of questions in Italy like, “Cosa e Thanksgiving attualmente?” I say we spend time with our families and eat, and often get a funny look in return as though to say, “You have a holiday for that? We call that dinner.” Then I mention the football and get a bit of a nod; its Italian equivalent, calcio, has been known to put quite a few menfolk at games and on sofas to watch really fit players chase a little ball around a faux battlefield while would-be soldiers scream.

Italy has also, and unfortunately, adopted the Black Friday trope of enticing discounts designed to encourage unbridled consumerism. Without the Friday off as in America, and no relaxing day off on the day before, it seems to fall flat. It is mostly put forth by international brands like Amazon and Aveda, and the advertising for it is everywhere.

The vulgarity of such grabbing and escalating violence around buying crap made in China has always affronted me. I have never “done” Black Friday, although I know people who participate annually in the US. (I may get on a soapbox about that practice at a different time, how Black Friday seduces the working poor much like the promise of a lottery, the idea of some ship finally coming in, somewhere.) My mom and I once went to Balliet’s in Oklahoma Cit
y for Black Friday. I returned home with a kelly green mock turtleneck, which needed constant small repairs with a needle and thread until I finally got rid of it, and a pleated white skirt of unflattering length but  I wore anyway for awhile until I tired of looking like a Civil War era doll.

I meant to write a post about what Jason and I did on Thanksgiving Day 2018, but it turned into this piece, a necessary prelude to our adventures yesterday in the Tuscan countryside. That post coming soon.